Whonix is a desktop operating system designed for advanced security and privacy. It realistically addresses attacks while maintaining usability. It makes online anonymity possible via fail-safe, automatic, and desktop-wide use of the Tor network. A heavily reconfigured Debian base is run inside multiple virtual machines, providing a substantial layer of protection from malware and IP leaks. Pre-installed applications, pre-configured with safe defaults are ready for use. Additionally, installing custom applications or personalizing the desktop will in no way jeopardize the user. Whonix is the only actively developed OS designed to be run inside a VM and paired with Tor.

Whonix consists of two parts: One solely runs Tor and acts as a gateway, which we call Whonix-Gateway. The other, which we call Whonix-Workstation, is on a completely isolated network. Only connections through Tor are possible. With Whonix, you can use applications and run servers anonymously over the internet. DNS leaks are impossible, and not even malware with root privileges can find out the user's real IP. 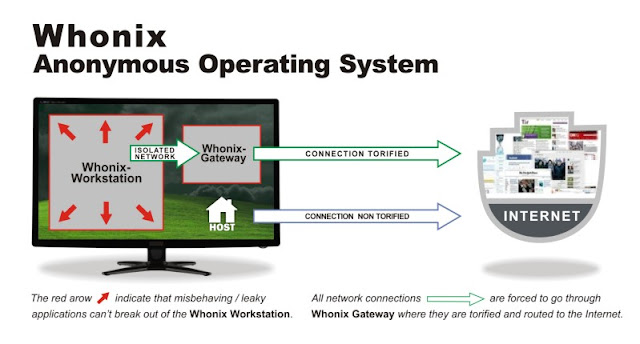 Whonix benefits anyone who does sensitive work on their desktop or online. This includes:

Or you can also upgrade from Whonix’s repository. Please refer to the following instructions:
https://www.whonix.org/wiki/Upgrading_Whonix_12_to_Whonix_13

Or you can also upgrade from Whonix’s repository. Please refer to the following instructions:
https://www.whonix.org/wiki/Upgrading_Whonix_12_to_Whonix_13