After making its influence in hacker and security circles, Kali Linux has now been published with Kali Nethunter, a version of the security suite for Android devices. The tool is a mobile distribution designed to compromise systems via USB when installed and run on an Android phone.
[adsense size='1']

“Our NetHunter images support programmable HID keyboard attacks, (a-la-teensy), as well as “BadUSB” network attacks, allowing an attacker to easily MITM an unsuspecting target by simply connecting their device to a computer USB port,” the Offensive Security team said. “In addition to these built in features, we’ve got a whole set of native Kali Linux tools available for use, many of which are configurable through a simple web interface.”

Nethunter is currently available for Nexus devices only, but builds for other Android devices are likely on the way. Nethunter contained a full Kali Linux toolset, including support for self destruction, software defined radio and the ability to launch a Kali desktop VNC session on Nexus phone.
[adsense size='1']
The tools are designed for use by an attacker who has physical access to a device — an insider threat — or someone who gains access through social engineering, tailing etc. 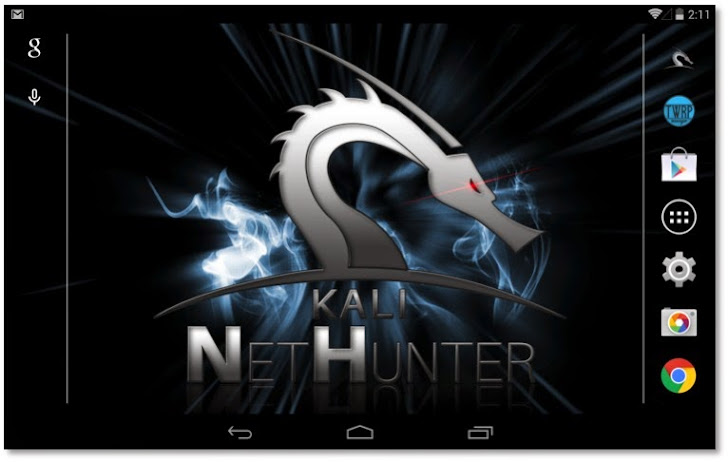 On one hand, Teensy Keyboard attacks on PCs can be used to automatically elevate privileges on a Windows PC and install a reverse-HTTP tunnel to a remote workstation. On the other hand, BadUSB can force a Windows PC to recognize the USB-connected phone as a network adapter and re-route all the traffic of the PC through it for monitoring purposes.
[adsense size='1']
Additionally, the Kali NetHunter configuration interface helps users to easily manage complex configuration files through a local web interface, which together with 802.11 wireless injection and a pre-configured connect VPN service make it a “formidable network security tool or discrete drop box – with Kali Linux at the tip of your fingers wherever you are.”
Kali NetHunter open source security platform supports Nexus 10 and 7 tablets and Nexus 5 phones built on the existing Kali (formerly Backtrack) Linux platform. The official Kali NetHunter images can be downloaded from the Offensive Security NetHunter download page.