Internet is a funny space. We have seen so many hunters being hunted here that it was hardly surprising when a hacked hacked into the website security portal, Acunetix. More so because the hacked claimed he did it for lulz.

The official website of world-famous Acunetix Web Vulnerability Scanner (WVS) was hacked and defaced by an unknown Croatian hacker on Saturday morning.

Besides leaving a defaced page, the hacker also left a message on the homepage of Acunetix’s website which says that he hacked the website just for fun. The deface page also had a YouTube video featuring Croatian prime minister Tihomir Orešković or Timmy as the hacker called him on the page.

“I did it for lulz! (Greetz to best prime minister – Timmy)” 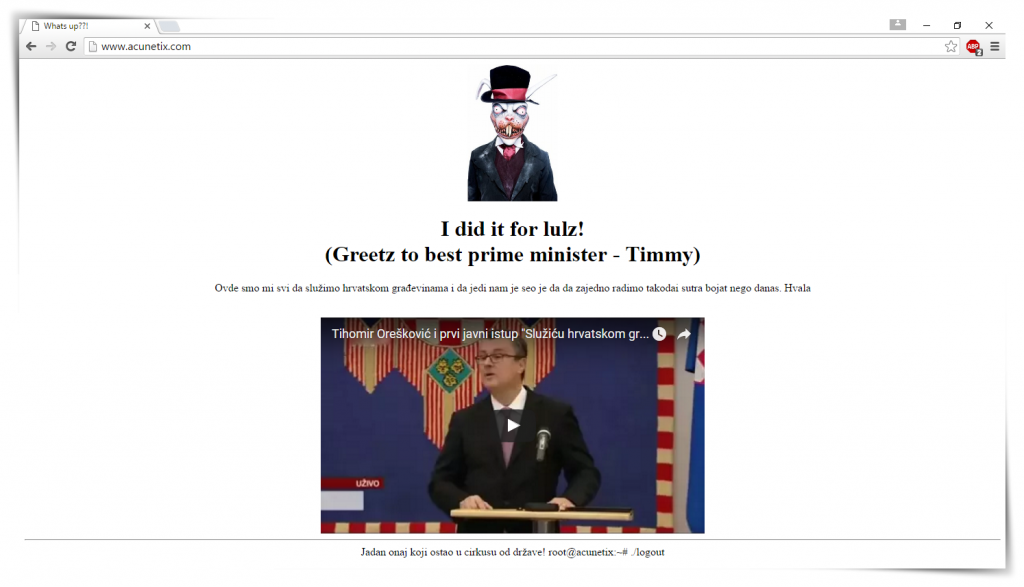 Acunetix immediately noticed the hack and took down the website for restoring it. While there is no confirmation on the incident from Acunetix itself, but the defacement shows even the web portal specializing in providing security to websites is not safe from hackers.

It is to be noted that Acunetix is using WordPress platform on its site, hence, it is not clear as to how it was possible for the hacker to deface the site. The WordPress version used by the firm was outdated allowing the hacker to sidestep whatever security was applied on the site, according to a researcher’s Facebook post.

The hack came among latest report exposing a serious security error in WordPress plugins called WP Mobile Detector which is apparently exploited by hackers to gain control of WP websites.

At the time of writing this article, Acunetix has restored the website.