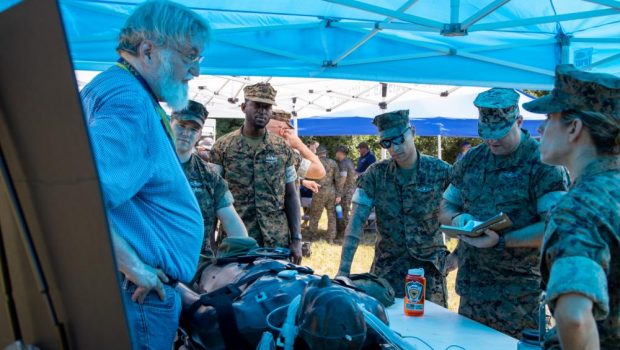 The event’s purpose was to take technology developed by ONR-supported scientists and engineers, put it into the hands of Marines and Sailors for experimentation in realistic operational scenarios, and solicit feedback from the warfighters on what worked well and what could be improved.

“As we prepare for future operations, it is vital that we equip our Sailors and Marines with the technology and resources they need for success,” said Chief of Naval Research Rear Adm. Lorin Selby. “Exercises like TOEE 22 are critical in determining what our warfighters need and if the technology we are developing can deliver in an operational environment.”

“The purpose of this exercise is to give technologies to the warfighter, see how they use them and get their feedback, and think about what are the right investments we need to make in future technologies,” said ONR Global E&A Director Troy Hendricks. “We work hand in hand with the Marines to really learn in a relevant, realistic environment how well these technologies perform, which gives us a path forward to improving them.”

Critical to TOEE 22’s focus was conducting technology experimentation in line with the emerging naval concept known as Expeditionary Advanced Base Operations (EABO), which involves deploying small but highly mobile units to isolated locations. EABO has the potential of quickly getting forces into a strategically vital area, and potentially in an adversary’s weapons engagement zone, in response to an evolving threat when no other U.S. military assets are available.

“I’m glad the Navy and Marine Corps are looking to make our lives easier and jobs safer by progressing and coming up with new technologies to stay ahead of the game,” said Lance Cpl. Hunter Topper, a participant in the exercise.

ONR Global E&A Deputy Director Dillard Patton said, “I can’t overstate the value of getting technology out of the lab and into the field, into the hands of warfighters. Our technologists get to learn in the mud, in the sand, in the water, and see where their technology-development gaps are and make rapid improvements.

“For the Marines, they get an early look at what technology is coming down the pipe, the chance to try it out and build trust with it, and offer their unique perspective as the end users,” he continued.

Justin Helton, the ONR Global science advisor assigned to II Marine Expeditionary Force, echoed this sentiment: “An exercise like TOEE is magic. You have scientists and engineers getting feedback on their systems; you have Marines getting exposed to technology and figuring out what it is, what it could be and what they want; and, together, they drive the demand signal for warfighter needs.”

This work, The Cutting Edge: ONR Sponsors Technology Experimentation at Camp Lejeune, by Warren Duffie, identified by DVIDS, must comply with the restrictions shown on https://www.dvidshub.net/about/copyright.