Clair is an open source project for the static analysis of vulnerabilities in appc and docker containers.

Vulnerability data is continuously imported from a known set of sources and correlated with the indexed contents of container images in order to produce lists of vulnerabilities that threaten a container. When vulnerability data changes upstream, the previous state and new state of the vulnerability along with the images they affect can be sent via webhook to a configured endpoint. All major components can be customized programmatically at compile-time without forking the project.
Our goal is to enable a more transparent view of the security of container-based infrastructure. Thus, the project was named Clair after the French term which translates to clear , bright , transparent .
Common Use Cases
Manual Auditing
You're building an application and want to depend on a third-party container image that you found by searching the internet. To make sure that you do not knowingly introduce a new vulnerability into your production service, you decide to scan the container for vulnerabilities. You docker pull the container to your development machine and start an instance of Clair. Once it finishes updating, you use the local image analysis tool to analyze the container. You realize this container is vulnerable to many critical CVEs, so you decide to use another one.
Container Registry Integration
Your company has a continuous-integration pipeline and you want to stop deployments if they introduce a dangerous vulnerability. A developer merges some code into the master branch of your codebase. The first step of your continuous-integration pipeline automates the testing and building of your container and pushes a new container to your container registry. Your container registry notifies Clair which causes the download and indexing of the images for the new container. Clair detects some vulnerabilities and sends a webhook to your continuous deployment tool to prevent this vulnerable build from seeing the light of day.
Hello Heartbleed
During the first run, Clair will bootstrap its database with vulnerability data from its data sources. It can take several minutes before the database has been fully populated.
NOTE: These setups are not meant for production workloads, but as a quick way to get started.
Kubernetes
An easy way to run Clair is with Kubernetes 1.2+. If you are using the CoreOS Kubernetes single-node instructions for Vagrant you will be able to access the Clair's API at https://172.17.4.99:30060/ after following these instructions.

Docker Compose
Another easy way to get an instance of Clair running is to use Docker Compose to run everything locally. This runs a PostgreSQL database insecurely and locally in a container. This method should only be used for testing.

Docker Compose may start Clair before Postgres which will raise an error. If this error is raised, manually execute docker start clair_clair .

Docker
This method assumes you already have a PostgreSQL 9.4+ database running. This is the recommended method for production deployments.

Source
To build Clair, you need to latest stable version of Go and a working Go environment . In addition, Clair requires that bzr ,rpm , and xz be available on the system $PATH .

Documentation
Documentation can be found in a README.md file located in the directory of the component.

Architecture at a Glance 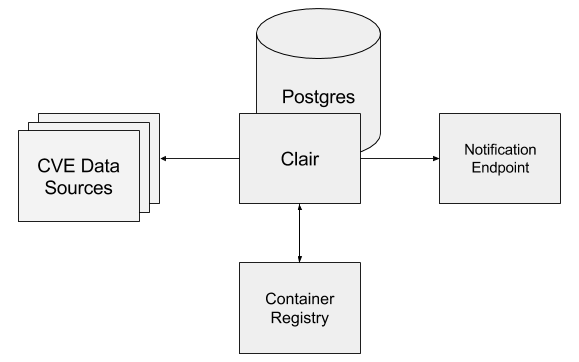 [adsense size='1']
Vulnerability Analysis
There are two major ways to perform analysis of programs: Static Analysis and Dynamic Analysis . Clair has been designed to perform static analysis ; containers never need to be executed. Rather, the filesystem of the container image is inspected and features are indexed into a database. By indexing the features of an image into the database, images only need to be rescanned when new detectors are added.

Customization
The major components of Clair are all programmatically extensible in the same way Go's standard database/sql package is extensible.
Custom behavior can be accomplished by creating a package that contains a type that implements an interface declared in Clair and registering that interface in init() . To expose the new behavior, unqualified imports to the package must be added in your main.go , which should then start Clair using Boot(*config.Config) .
The following interfaces can have custom implementations registered via init() at compile time: