Text to Speech Voices
Inverse Path is readying a tiny, open-spec “USB Armory” SBC that runs Linux or Android on an i.MX53, and offers Trustzone, secure boot, and USB emulation.

The USB Armory single board computer, which Inverse Path plans to launch this quarter on the Crowd Supply crowdfunding site, is not your ordinary open source hacker SBC. For one thing, it’s super tiny (65 x 19 x 6mm), with only two real-world ports — a USB 2.0 OTG port and a microSD slot — and it’s specifically aimed at secure computing applications.

[adsense size='1']
The USB Armory connects to other systems via the USB port, which is also how the device sips power at 5V. Consumption is less than 500 mA, according to Inverse Path. USB device emulation covers mass storage, HID, and Ethernet, with the latter enabled via a full bidrectional TCP/IP connection using CDC Ethernet emulation.

The TrustZone support extends beyond the CPU to propagate throughout all system-on-chip components, says Inverse Path. The combination of all these security features “greatly limits the potentiality and scope of supply chain attacks,” says Inverse Path.

Potential applications for the USB Armory are said to include:

The device runs Android, Debian, Ubuntu, or FreeBSD on a Cortex-A8-based Freescale i.MX53 processor clocked at 800MHz. This would appear to be the i.MX537 model, rather than the i.MX535, which is typically clocked at 1GHz. 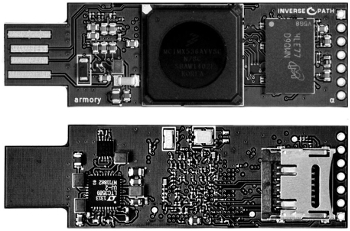 The USB Armory ships with 512MB DDR3 RAM. Aside from the USB and microSD connections, the only interface is a 7-pin header (normally holes, only) for GPIO and UART signals, plus power. Inverse Path has posted schematics and PCB layout files licensed under GPLv2.

Specifications listed for the USB Armory include: