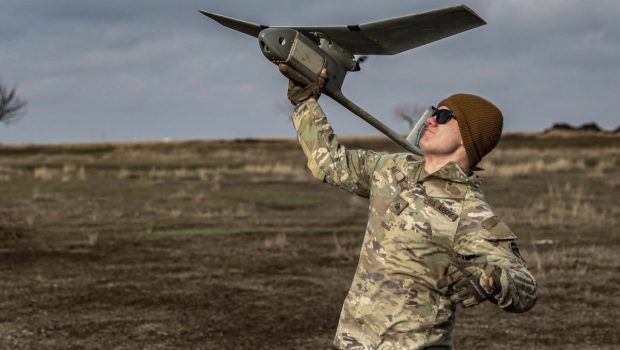 With the recent upgrades made to the RQ-11B Raven Small Unmanned Aircraft System, referred to as The Raven, Krebs believes the task is made easier.

“A Raven is a small unmanned aerial vehicle, a drone that has many different capabilities,” Krebs said. “It can fly out to 10 kilometers, and allows you to capture photographs and even video.”

The Raven system is the most widely deployed unmanned aircraft system in the world, ideal for low-altitude intelligence, surveillance and reconnaissance missions that depend on rapid deployment and pinpoint maneuverability.

“One of the civilian contractors with AeroVironment, the manufacturer of the Raven, is here to help us learn more about its capabilities and show us how to use it more efficiently, and the capabilities that it has,” Krebs said. "Upgrading our technology will allow us to be more versatile in the upcoming conflicts."

Technology is always ever-changing. It's important for the Army to stay up with those changes.

Lightweight and straightforward to operate, the Raven is rucksack portable and can be hand-launched for both day and night observation. The Raven has an optional stabilized gimbaled payload, and delivers real-time color and infrared imagery to the ground control and remote viewing stations.

Due to its advanced avionics, the Raven can be operated manually or programmed for autonomous navigation.

“For my unit specifically as a recon unit, what we're doing is we're going to use the Raven to scout positions forward so we put less of a risk for our soldiers,” Meyer said. “I don't have to have my team maneuvering out in the open field.”

The Raven’s purpose is to be used for reconnaissance missions, call-for-fire missions and to enhance the Soldiers' capabilities - lowering the risks to the Soldier, reducing U.S. casualties, and improving the success rate of various missions.