On September 19, Techcross, the global No. 1 manufacturer of ballast water management system, signed a technology transfer agreement with DSME (Daewoo Shipbuilding & Marine Engineering) for a patent of the ‘LNG Carrier’s VRCS (Valve Remote Control System). It is the full-fledged implementation of what was discussed at the technology transfer conference held at the KICOX (Korea Industrial Complex Corporation) in June.

The patent guarantees technology and safety enough to perform even at an extreme temperature of minus 52 degrees Celsius and was also applied to the world’s first icebreaker LNG vessel that DSME won an order. For the convenience of users, centering on the ballast water management system, Techcross also expanded its service lineup to TLGS (Tank Level Gauging System) and VRCS, as well as IBTV (Integrated BWMS, TLGS, VRCS), a platform that can control all these systems. Through this contract, Techcross would be able to further upgrade the VRCS technology provided for LNG carriers. 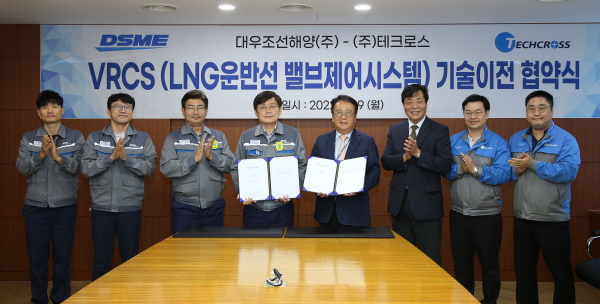 A person in charge of Techcross who signed the contract expressed a positive outlook by saying, “DSME and Techcross were able to transfer this patented technology because of the trust they had built up while steadily supplying ballast water management system. Through this contract, we will be able to have mutual synergy in the future businesses of the two companies.”
Source: Techcross