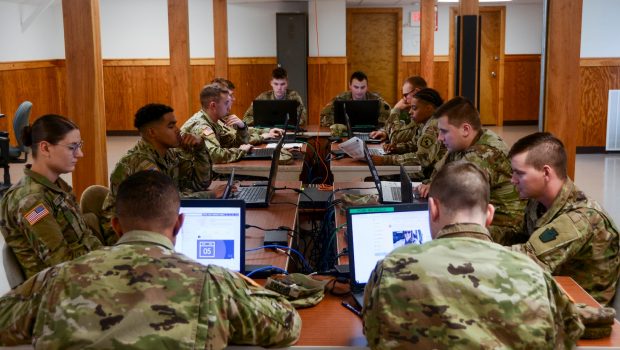 ARLINGTON, Va. – As the eyes of the nation turn to Tuesday’s midterm elections, the integrity of polling and the security of the electoral process are the focus of National Guard cyberspace operations teams nationwide.

“We saw the challenges that came out of the 2016 election, and that was when we really started to address the issues of election systems, particularly when election systems became part of critical infrastructure,” said Air Force Maj. Gen. Rich Neely, adjutant general of the Illinois National Guard. “We are working proactively, not only on Election Day, with preceding security analysis checks.”

During primary elections earlier this year, the National Guard provided cybersecurity support to eight states. The Guard will increase that to 14 through the November midterms.

The National Guard cyber force includes over 2,200 Citizen-Soldiers and -Airmen from 38 units. Today, these cyber defenders support election-related missions across the nation.

“We are proud to once again serve our state and community by defending our election cyberspace domain,” said Air Force Capt. Brett Leighton, the team leader with the Iowa National Guard’s Joint Task Force Cyber.

“From a National Guard standpoint, we treat this like any sort of domestic operation, with partnerships, because we are Citizen-Soldiers [and -Airmen],” said Hunt. “We live in the state; we have a vested interest in our state election, along with our federal elections.”

Neely agreed about the significance of interagency partnerships.

“It’s really about a whole community coming together,” he said. “It’s the federal and state agencies coming together [with the Guard] to secure these elections. We are using these unique skills and equipment we have as military members to partner for a whole-of-government approach.”

“We are that third party assisting so that confidence is instilled across all systems on Election Day,” Welsh said.