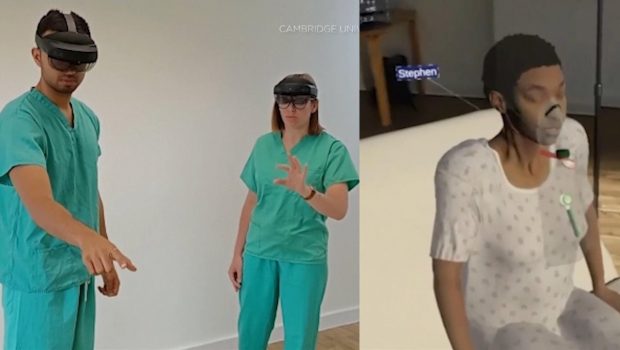 In what it claims will be a world-first, Cambridge University is aiming to start using holographic patients in medical training for its students in 2023.

"What simulation allows us to do is to have our students fail in a safe environment and to feel safe to fail. Of course, that's not something we want to do with real patients,” Jonathan Martin, co-lead for Simulation at Cambridge University Hospitals, told APTN.

Medical staff and students wearing holographic headsets are all able to see the same environment, and the patient on the bed isn’t real.

It’s not quite virtual reality, which totally replaces the user's surroundings with virtual elements. Instead, the device medical students will use adds virtual elements to a real environment, creating what’s called a mixed reality.

Other students would also be able to join through an app on their phones.

"The simulation environment allows the students to take those next steps in their learning, where they have an increasingly real environment around them to practice the skills and techniques that they'll need when they come to meet real patients,” Martin said.

The device is being developed at Cambridge University Hospitals and by Los Angeles-based tech company, GIGXR.

This technology is projected to be more accessible for hospitals and universities that cannot afford physical high-fidelity simulators, which look like mannequins.

For now, a single module is available that focuses on respiratory conditions.

Students can use a stethoscope, read a patient monitor and wear oxygen masks, among other things. The holographic patient shows symptoms of asthma, followed by anaphylaxis, pulmonary embolism and pneumonia.

In the long run, more modules will be developed with increasing levels of difficulty available to be tackled, from view-only mode to an assisted-decision mode and even possibly an expert mode.

More features will be coming in later versions, the first of which, expected to be released later this year.