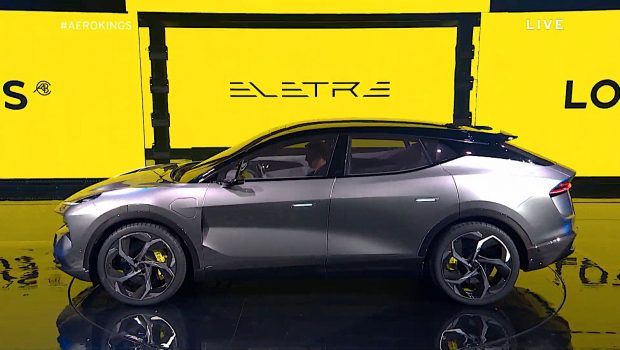 The company didn’t reveal the amount raised or participating investors, according to a Reuters report. Lotus Technology is part of Group Lotus, which is jointly owned by China’s Geely Holding Group and Malaysia’s Etika Automotive. Described by the automaker as “a global intelligent technology subsidiary,” its stated role is to quickly advanced battery and energy management innovation.

Lotus Technology was launched in 2021 with the establishment of its headquarters in Wuhan, China. The headquarters isn’t expected to be completed until 2024.

In addition to the all-electric Evija hypercar and the last gas-powered sports car from the company, the Emira, Lotus unveiled its first all-electric “hyper SUV” in March, the Eletre.

It’s able to reach 62 mph in less than three seconds and takes just 20 minutes to recharge 248 miles. With four-wheel drive and a battery capacity exceeding 100 kWh, the Eletre generates 600 horsepower.

As with other modern EVs, the Eletre employs a skateboard architecture, and makes use of aluminum and high tensile steel to improve overall structural rigidity. Despite Lotus founder Colin Chapman’s belief in simplification and lightness, the vehicles will hardly be lightweights, as batteries add hundreds of pounds in weight.

The Eletre will be followed in 2023 by an E-segment four-door coupe, and in 2025 by a new D-segment SUV. This trio will be joined in 2026 by an all-new electric sports car.

A new era for Lotus

This year marked a new chapter in Lotus’s history, as Lotus co-founder and racer Hazel Chapman died late last year at the age of 94.

She not only initially funded the company to the tune of £50, she sat on the board of Lotus Cars, Team Lotus and Lotus Components. Hazel’s astuteness as a businesswoman sustained the company, despite its meager sales, signing off on every new Lotus.

Last year also marked another end of an era as production concluded on the gas-powered Elise, Exige and Evora models. During the cars’ 26-year run, 51,738 cars were built. Combined, they represent almost half of the total production of the 73-year history of Lotus.

Of those cars, the Evora is the only Lotus model currently sold in the United States, with a base price of $99,150. Its supercharged Toyota 3.5-liter V-6 makes 416 horsepower and 317 pound-feet of torque with the 6-speed manual transmission, or 332 lb-ft with the 6-speed automatic.

“We will miss them, but a bit like Christmas, once it’s over, the excitement for the next one starts to build,” said Russell Carr, design director, Lotus Cars, in a statement in December 2021.