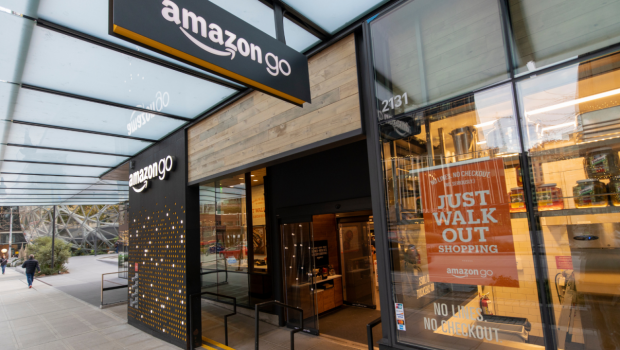 Is Amazon’s Just Walk Out Technology Making Shopping Too Easy?

As part of The Drum’s Evolution of E-commerce Deep Dive, we ask whether the e-commerce giant freezing its ‘frictionless’ physical retail rollout means a little bit of friction isn’t such a bad thing.

Amazon is pausing the rollout of its cashierless Amazon Fresh stores in the UK, The Sunday Times revealed last month. Although it will reportedly move forward with the opening of new stores for which leases had already been finalized, it is halting its search for new locations and is scrapping plans for dozens of openings, citing “disappointing sales and a bleak economic outlook,” according to the Times.

This action has experts wondering what’s next for this groundbreaking technology that Amazon has been touting for the past six years.

As the name suggests, Just Walk Out enables customers to collect what they need and then simply walk out of a store without having to go through any kind of checkout process or even interact with a single other human being. It blends artificial intelligence (AI), machine learning, computer vision, ceiling cameras and weight sensors on shelves to track items that have been removed from a shelf, placed into a customer’s ’virtual cart’ (basically the equivalent of your online cart when you place an order on Amazon.com) and then taken out of the store through waist-high sensors that guard the exits and essentially serve as automated cashiers.

Amazon first implemented this technology at its Amazon Go stores, which first opened in Seattle in late 2016. Amazon Go customers download an app, which they scan before entering and which facilitates the cashierless payment process, and the technology was later applied to Amazon Fresh stores and certain branches of Whole Foods Market, which Amazon purchased in 2017.

In 2020, Amazon developed a licensed version of the technology to be outsourced and sold to independent retailers. For the first time, small grocers could implement Amazon’s cashierless shopping model into their own spaces, the idea being that customers would flock to stores that were able to provide a more “frictionless” experience.

Rather than scanning an app, customers entering an independent grocery store equipped with Just Walk Out need to scan a credit card at a turnstile, which then displays the text: ’Just Walk Out technology by Amazon.’ Aside from that, Amazon does not push its own branding – the look and feel inside the store remains largely the same.

“​​We believe that many shoppers are more likely to choose to shop at a store when the experience is fast, easy and convenient, and we know our technologies can facilitate this for retailers,” the company said in a recent blog post. “By using our technology in their stores, retailers can also help their employees spend more time assisting shoppers, answering questions, helping shoppers find items and restocking shelves as needed rather than operating checkouts.”

It sounds like a reasonable enough idea. After all, the proliferation of self-checkout machines has arguably demonstrated that people prefer having an alternative to interacting with a flesh-and-blood cashier. Why not just get rid of the checkout process altogether?

On top of that, Amazon has proven unequivocally that (at least in the realm of online shopping) easier is better and the fewer steps that are required in the checkout process, the more (it seems) people will keep coming back.

So why the recent pause on growth in the UK? Is it possible that Just Walk Out – impressive though it certainly is – is missing the mark somehow?

Too much innovation, too quickly?

Amazon might be making the in-person shopping experience a little too easy for customers, says Gregory Ng, chief executive of Brooks Bell. “The reality is that a lot of humans are not ready for this yet,” he says. “There will be a need for increased education and comfort for being OK with literally walking out the door with something. There is a huge learning gap and adoption gap that Amazon might be on the cutting edge of, but the general consumer is not close to adopting at a massive scale.”

In other words, while the concept behind Just Walk Out might seem on its surface to be a winning idea, the reality is that many people are likely to find the experience uncomfortable and will tend, therefore, to shy away from it, preferring the more comfortable routine of interacting with a cashier (or at least interacting with some kind of formal checkout process, even if it’s an automated one). The point, Ng says, is that many people today appear to prefer having to go through a visibly obvious transitional phase at the end of the shopping experience, at the other side of which they can be told that the experience is complete and they can move along.

Without such an obvious transitional phase – some kind of signal marking the end of the shopping experience – customers, Ng says, are liable to think to themselves: “‘Wait a minute, I don’t have to take my wallet out? You’re not going to stop me and look at my receipt? I just literally walk out? It feels like I’m shoplifting…’ In reality, consumers would need some sort of physical gate to walk through where a light turns green or some sort of button to say ‘I’m done shopping,’ and a message that says ‘you're free to go now’.”

It may take some extra time, but maybe having a cashier hand you your bags or even having an automated checkout machine spit out a receipt to you and telling you in its mechanical voice to “shop with us again soon“ is better than simply walking out. In the future, perhaps Amazon will use fleets of anthropomorphic robots to stand at the exits of their cashierless stores and tell customers as they’re leaving: “You’re done shopping now – have a great day.” Yes, it sounds a little Black Mirror-esque, but it may, oddly enough, make many people feel more comfortable with just walking out with their groceries.

The need for a clearly defined identity

The chilly reception of Amazon Fresh stores throughout the UK comes down, at least in part, to a problem of identity and value proposition, says Steve Mader, global head of commerce at UK-based agency PHD.

“[The stores are] not entirely sure what they are,” he says. “They’re not a full grocery store, like a Sainsbury’s or a Tesco … It’s trying to do too many things. It’s trying to either be a mini local grocery store, or it’s trying to be a prep sandwich shop, and it’s not necessarily doing either extremely well … the value prop of the store is just not quite there yet.”

How, in the future, might Amazon rethink its physical, cashierless retail experiences in order to attract more customers and create a more enjoyable and sustainable business model?

One solution, Mader suggests, might lie in investing more resources and attention in the shopping environment itself. “To differentiate itself in the market, [Amazon has] to be store-focused, value prop-focused and focused on the store environment,” he says. “Because other than the initial ‘wow’ factor [that comes from using Just Walk Out technology], a shopper is not going to walk into an Amazon Go store and choose that over at Tesco across the street just because they're gonna save five seconds on walking in and out if the value prop is not good enough. It has to focus on being an amazing grocery store first … [and] make sure that the shopper actually enjoys going to the store rather than just using the tech.”

For more on the Evolution of E-commerce, check out The Drum’s latest Deep Dive.