The NSA has built ICREACH, a Google-like search engine that secretly provides data — metadata of both foreigners and citizens on US soil — to nearly two dozen U.S. government agencies, including the DEA, FBI, and CIA, The Intercept reported.
Many of those surveilled data had not been accused of any illegal activity as well. But until now, it is unclear that exact what mechanism was used by the US intelligence agency to share the massive amounts of surveillance data, as well as number of government agencies it was sharing information with.
Although, the classified documents show that the FBI and the Drug Enforcement Administration were the "key participants" in the ICREACH program, but it has been accessible to more than 1,000 analysts at 23 U.S. government agencies that perform intelligence work.
[adsense size='1']
This is not the first time when the ICREACH program has been made public, the Guardian journalist Glenn Greenwald's book named “No Place to Hide: Edward Snowden, the NSA, and the U.S. Surveillance State” also contained a slide among its myriad documents that highlighted the some of the metadata types that were accessible through ICREACH: 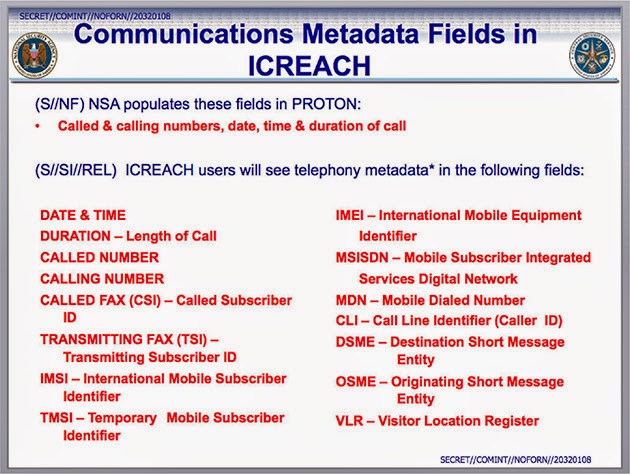 According to The Intercept journalist Ryan Gallagher, ICREACH search engine, masterminded by recently retired NSA Director Gen. Keith Alexander, was launched by the NSA in 2007, but was only made publicly available on Monday this week.
Knowing those 850 billion metadata shared through ICREACH program, one can track people’s movements, map out their networks of associates, predict future actions, and potentially reveal religious affiliations or political beliefs.
[adsense size='1']
The NSA described the ICREACH program as a “one-stop shopping tool” for communications analysis, which generates a portrait of communication patterns associated with a particular piece of information, like a phone number or e-mail address linked to a person.
ICREACH was designed to pull information stored in multiple databases created by programs greenlit under Executive Order 12333 — a President Reagan-issued order vastly expanding the data-collection powers of the American intelligence community from foreign communications networks, though the report claims that the system also contains "millions of records on American citizens who have not been accused of any wrongdoing."