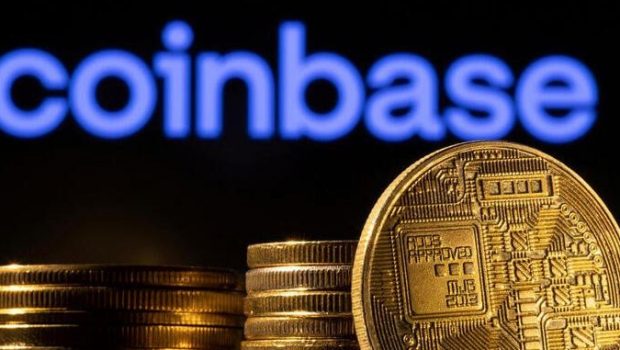 A representation of the cryptocurrency is seen in front of Coinbase logo in this illustration taken, March 4, 2022. REUTERS/Dado Ruvic/Illustration/File Photo

(Reuters) - Cryptocurrency exchange Coinbase Global Inc is facing a patent lawsuit related to its digital trading technology, brought by a crypto company whose digital token offering led to a settlement with U.S. securities regulators in 2019.

Veritaseum Capital accused several Coinbase services, including its blockchain infrastructure for validating transactions, of infringing the patent. It asked the court for at least $350 million in damages.

Coinbase, one of the world's largest platforms for trading cryptocurrency, did not immediately respond to a request for comment on Friday.

Veritaseum formerly issued the token VERI. In 2019 Middleton and two of his Veritaseum entities paid the U.S. Securities and Exchange Commission more than $9.4 million, including a $1 million penalty against Middleton himself, to settle charges of a "fraudulent scheme" to sell the tokenin 2017 and 2018.

The SEC had accused them of misleading investors about demand for the tokens and manipulating their price, among other things. They agreed to the settlement without denying or admitting to the underlying charges.

Middleton and Veritaseum argued to a Brooklyn federal court earlier in 2019 that they did not make any fraudulent statements, that the tokens were not securities, and that trading at issue was "actually an effort by Mr. Middleton to test out a new online cryptocurrency exchange."

Veritaseum Capital's attorney Carl Brundidge of Brundidge Stanger said Friday that Coinbase was "uncooperative" when they tried to settle out of court.

Middleton and Veritaseum separately sued T-Mobile in 2020, alleging the telecom company's security lapses led to hackers stealing $8.7 million in cryptocurrency from them. T-Mobile contested the claims, and the case was sent to arbitration in August.

The case is Veritaseum Capital LLC v. Coinbase Global Inc, U.S. District Court for the District of Delaware, No. 1:22-cv-01253.

For Veritaseum: Carl Brundidge and David Moore of Brundidge & Stanger

For Coinbase: not available