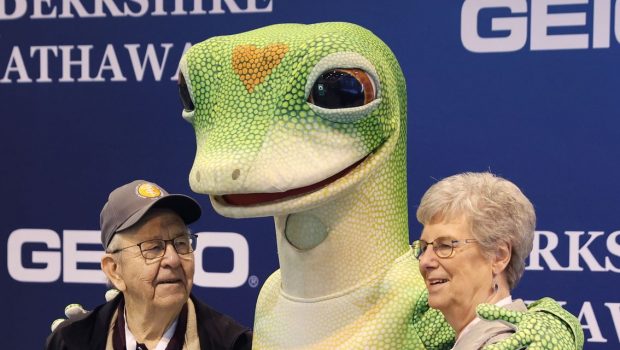 Geico is one of Warren Buffett’s favorite businesses at

Berkshire Hathaway
,
but the big auto insurer has struggled in recent quarters and there appears to be no upturn in sight.

A senior Berkshire official acknowledges that Geico has been hurt by its failure to embrace telematics, the use of devices on automobiles that tell insurers how customers are driving.

Until the past few years, Geico had been one of the best businesses inside Berkshire Hathaway (Ticker BRK/A, BRK/B) and the jewel of its vast insurance operations. Buffett has a soft spot for Geico because it was one of his original—and most successful—investments dating back in 1951, when he was just 21.

Berkshire bought out public shareholders who owned 50% of the company in 1995. Buffett suggested in his annual shareholder letter in 2019 that Geico was worth about $50 billion.

Geico is coming off a rocky second quarter when it had an underwriting loss of nearly $500 million, while its rival

) operated in the black. Geico has had underwriting losses for four consecutive quarters.

Like other auto insurers, Geico has been stung by higher claims costs, a result of the surge in the price of used cars, auto parts, labor and an upturn in driving activity since the pandemic. But some of Geico’s wounds are self-inflicted as the auto insurer has been slow to integrate telematics, or the use of real-time driving data, to price auto policies.

Progressive and Geico have been the two stars of the auto insurance business for most of the past two decades as they grew rapidly by selling policies directly to consumers, a low-cost method popular with younger drivers who feel they don’t need agents.

Geico, in particular, benefited from tight cost controls although it long has been one of the larger TV advertisers. The Geico gecko is one of the better-known corporate pitchmen.

But Progressive in recent years has outshined Geico in its use of technology to price policies.

Progressive is a leader in telematics, which can help auto insurers to better price insurance policies for customers by predicting the risk of future accidents through such factors as acceleration, braking and time of day—late-night driving tends to be more dangerous. Telematics also helps insurers with regulators unhappy with more controversial factors used to price policies like credit scores.

Geico is the No. 2 auto insurer in the country based on premium revenues behind State Farm, while Progressive is third. Geico’s market share is about 14%.

Given that Berkshire has a market value of $630 billion and annual net income of more than $30 billion, Geico’s problems don’t matter much to the overall company. And most of Berkshire bigger businesses are humming, including the Burlington Northern Santa Fe railroad and its big utility business, Berkshire Hathaway Energy.

Berkshire stock is outperforming the overall market this year. Its Class A shares, at around $433,000, are off 4.5% this year, ahead of the

S&P 500
,
which has returned about negative 12% including dividends. Berkshire’s more liquid Class B shares rose 1% Monday to $288.51 and have a similar year-to-date performance as the A shares.

But one Wall Street analyst, KBW’s Meyer Shields, cited Geico when he put an Underweight on Berkshire in a trading call for the rest of the year. He cited “Sustained GEICO Combined Ratio Pressure,” a reference to Geico’s underwriting profit margin.

“Notwithstanding stabilizing used vehicle and rental car costs, still-rising labor and auto part cost inflation and the delayed impact between filed, written, and earned rate increases imply limited top-line growth and underwriting margin pressure, likely subsequently exacerbated by rising marketing spend,” Shields wrote. He does have a Market Perform rating on Berkshire with a price target on the Class A shares of $535,000.

Geico’s troubles came up at the annual meeting of Berkshire Hathaway (BRK/A,BRK/B) in April when the head of Berkshire’s entire insurance business, Ajit Jain, was asked by a shareholder about Geico’s weak showing relative to Progressive.

A longtime Berkshire insurance executive, Jain replied that “Progressive has done a much better job than GEICO, as you point out, both in terms of margins and in terms of growth rate. There are a number of causes for that, but I think the biggest culprit as far as GEICO is concerned, and again you rightly pointed out, is telematics. Progressive has been on the telematics bandwagon for, I don’t know, more than 10 years, probably closer to 20 years. GEICO, until recently, wasn’t involved in telematics.”

One sign of Geico’s woes is that Berkshire investment manager Todd Combs, who was named Geico CEO in late 2019, is still at the job, despite Buffett’s comment in early 2020 that Combs role likely would be temporary.

“Todd is there and I hope very much that he’s not there very long,” Buffett told CNBC in early 2020. “Our intention always is to promote from within. We would hope to pick out the right person at Geico.” Buffett, Berkshire’s longtime CEO, turned 92 in late August.

“We think that Geico’s poor underwriting results was a big part of the reason Todd Combs was brought in to oversee the business back in December 2019,” wrote

analyst Greg Warren in August. “Unfortunately, he came on board right as the pandemic was going to toss the entire U.S. auto insurance industry into uncharted territory. The company is also now dealing with the dynamic that its low-cost sales model does not respond as quickly to rising claims costs like we are seeing in the current market.”

Geico’s troubles may highlight one of the pitfalls of Buffett’s management style. Outside of the annual meeting, when a limited number of shareholders can ask him questions, there can be little or no opportunity for shareholders or analysts to query him or his management team.

If Berkshire had quarterly conference calls, Buffett likely would have been asked about the Geico situation, and changes at Geico might have happened sooner.

One challenge for Geico is that Progressive has built up such an enormous database of real-time driving information that it may be tough for Geico to catch up.

Jain expressed optimism at the annual meeting about Geico, but suggested it will take time.

“It’s a long journey, but the journey has started and the initial results are promising. It will take a while, but my hope and expectation is that hopefully in the next year or two, GEICO will be in a position to catch up with Progressive in terms of telematics. And hopefully, that will then translate into both growth rate and margins.”

Write to Andrew Bary at andrew.bary@barrons.com