So Apple pushed out it’s latest and great OS X version 10.10 called Yosemite, but it’s facing a bit of an uproar at the moment about some Spotlight privacy issues. For those who are not familiar, Spotlight is some kinda of super desktop search that searches everything on your computer (and now also the Internet) – which is not cool as every search means your physical location & search term is sent to Apple (and 3rd parties like Microsoft) every time you use Spotlight. 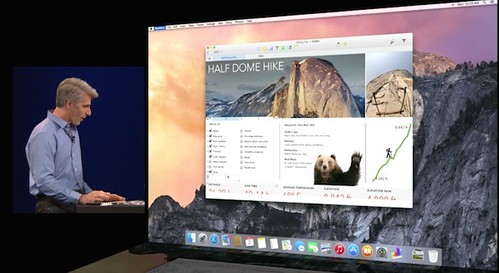 The upside? Yosemite is pretty cool and also security wise it comes with patches for both POODLE and Shellshock. Even so, Apple should know better than this and respect privacy by default as they surely understand how something like can blow up.

[adsense size='1']
There’s growing disquiet over Apple’s desktop search app Spotlight, which sends queries for things back to the company’s servers to process. Spotlight phones home in OS X Yosemite, version 10.10, and it is enabled by default: it can be switched off, but with Apple insisting that it now takes people’s privacy seriously, the software has raised some eyebrows. It appears Spotlight sends queries, along with your location, back to Apple over the internet so the company can suggest related things from the web using Microsoft’s Bing engine. Apple says it needs to see your queries so it can improve Spotlight’s algorithms for suggesting things. So, for example, searching for “weather” on a Register Mac running OS X 10.10 reveals files, folders and installed applications (such as the Windows 8.1 weather app in Parallels) on the machine containing the keyword; that’s the local search part. This is what you’d expect to see. But then Spotlight contacts Apple remotely to get recommended software from the Apple App Store, and a search by Bing for any relevant websites. [adsense size='1']
I can see why they turn it on by default though, the majority of users wont know what is happening and they will enjoy the richer search experience that Spotlight gives them now – ala Facebook style. Do something that pisses off a small subset of more technical users, and see how the public backlash is – if it’s not too bad you profit. This has spread far and wide though, reaching some mainstream news sites – I’m not exactly sure if the average user will be enraged though as we seem to live in a post-privacy kind of society now where people accept companies collect their data.
Yosemite was released late last week after a string of betas were made available to developers, the first in June. The OS was finalized as Apple chief exec Tim cook started waving around his company’s alleged efforts to safeguard privacy; Cook hopes to use privacy as a differentiator in the iGiant’s ongoing battle against arch rival Google. But the people behind Fix-macosx.com reckon Spotlight isn’t the only component of OS X Yosemite that unnecessarily phones home. “A myriad system and user processes are sending data to Apple in a default configuration, and we want to fix those, too,” they promise. A collaborative project to identify additional data collected by Apple and other third parties has been set up by the Fix Mac OS X team. “This work is powered by Net-Monitor, our open-source toolkit for auditing phone home behaviour system-wide,” the developers add. Apple’s collection of search queries in its cloud is not limited to OS X Yosemite: the Spotlight Suggestions and Bing Web Results are also included in iOS 8. “It has to do with sending data to Apple,” Sean Sullivan, a security advisor at F-Secure, told The Register. “It’s a being-spied-on-by-the-cloud issue.”

[adsense size='1']
How to restore your privacy Disable these options: 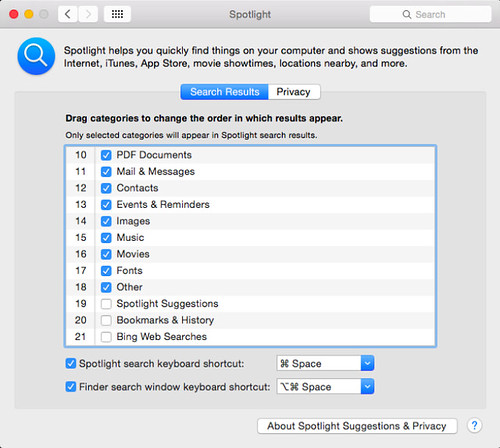 There’s also a Python script to do it here – fix-macosx.py