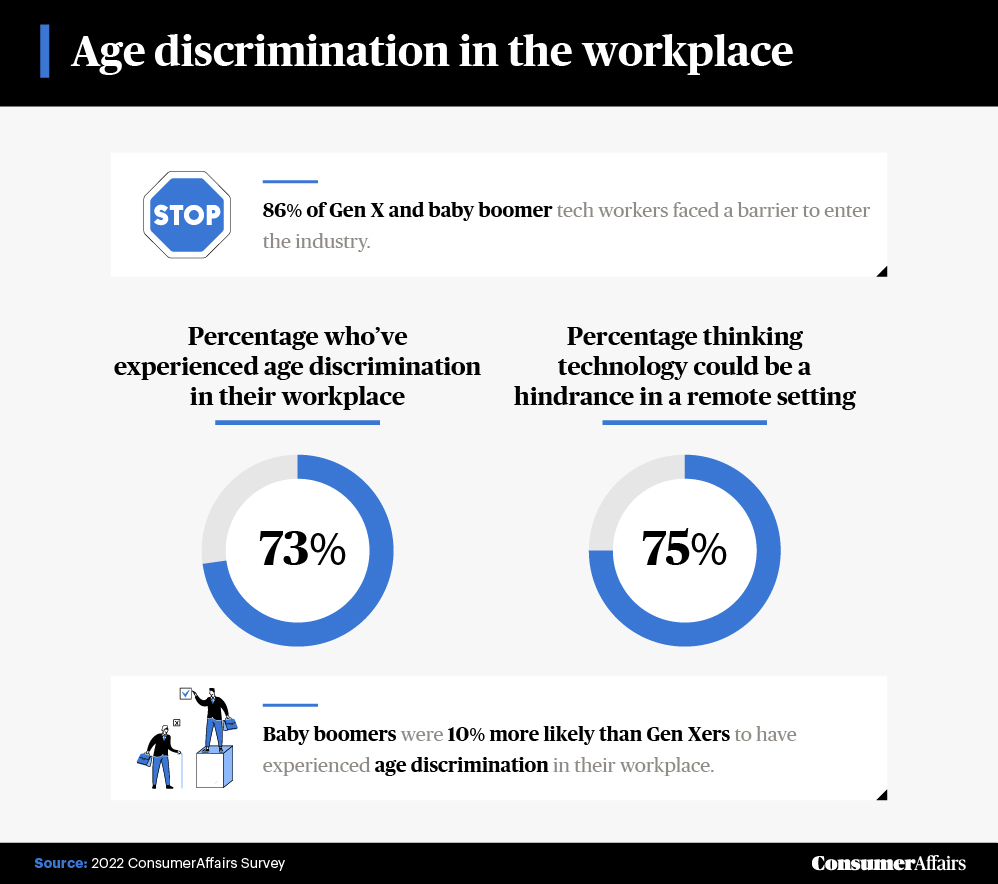 With the rapid evolution of tech devices and digital products, there always seems to be something new every day. Sometimes it’s hard to keep up, and that’s true no matter how old you are. But for older generations, it’s certainly understandable that they might be less intuitive when it comes to technology.

Most new technologies that are used by the general public are fairly user-friendly these days, but the pace at which things have been changing and being introduced to consumers can make it difficult to adapt. Is this age of the tech boom having a negative impact on certain generations? Does it make older generations feel discriminated against, particularly in the workplace?

A new study from ConsumerAffairs analyzed these questions and more, surveying over 1,000 baby boomers and Gen Xers to get a sense of their feelings on technology, how it has affected their day-to-day and more.

In the first part of the ConsumerAffairs study, they asked respondents (age 45 and older) whether technology makes them feel overwhelmed. Notably, 91% admitted to feeling overwhelmed by technology, and 26% said they felt overwhelmed by it a few times per week. Computers were by far the most overwhelming tech, with 32% of baby boomers and Gen Xers voting it as their top choice.

Interestingly enough, 31% of respondents said that Instagram and Facebook made them feel overwhelmed, and those two were also tied with smartphones. Given that social media, computers, and smartphones go hand in hand, it’s understandable that they would be especially overwhelming for older generations.

As the metaverse continues its evolution, more and more companies are jumping on board the virtual reality train to see what sticks and what doesn’t. Even Disney made headlines recently for revealing plans to recreate its parks in the metaverse, on the Disney+ app, no less.

“We have before us an opportunity to turn what was a movie-service platform to an experiential platform and give them the ability to ride Haunted Mansion from a virtual standpoint,” CEO Chapek said in a recent interview.

So where does that leave baby boomers and Gen Xers? While 76% of these generations acknowledged that the metaverse would allow them to do things they couldn’t do in real life, just 9% said they were actually excited about this emerging technology.

All of this begs the question: are Gen Xers and baby boomers feeling discriminated against in the workplace as a result of the ever-changing technological world? According to the study, the answer is, unfortunately, yes. A whopping 86% of respondents surveyed for the ConsumerAffairs study who worked in the tech industry said they faced a barrier when attempting to enter the industry, as a result of technological advancement. And, overall, 73% said they experience age discrimination in the workplace.

In the new world of remote work especially, technology can very easily become a major barrier for employees who belong to older generations. The study showed that 75% thought technology could be a hindrance in a remote work setting, which speaks to the need for better training and more willingness for flexibility on the part of employers who want to retain valuable employees of a certain age range.

This is an ongoing issue across industries, not just in the tech sector. Unfortunately, the general perception that younger generations are more tech-savvy and better at adapting to technology continues to plague the working world.

“It’s the widespread idea that young people have more tech fluency and are able to pivot more quickly,” Valtech diversity and inclusion director Sheree Atcheson said in an interview. “In a start-up situation, another issue is about them being able to take a lower wage and higher levels of equity which pays off later, an approach that doesn’t work for a lot of older people with family responsibilities.”

Work aside, what technologies are these generations consuming most frequently? As it turns out, the majority seems to be using tech for financial transactions, as 58% said they order food from a delivery app, primarily, and also send money through an app. Fifty-seven percent said they pay bills online, and 54% said they buy groceries through an app. The least utilized technologies among Gen Xers and baby boomers were ride-sourcing apps (37%) and dating apps (16%). However, Gen Xers were 29% more likely to use a dating app than baby boomers.

Given the likelihood that rapidly-changing technologies will be overwhelming for consumers of older generations, you might assume that they largely prefer analog experiences over digital ones, for the most part. You’d most certainly be right, according to the survey. Forty-one percent of respondents said they prefer in-store grocery shopping, for example, compared to 31% who said they use Instacart, 17% who use Amazon, and 11% who use Shipt. It’s the same with food delivery methods: 34% get food directly from a restaurant, while 33% use Uber Eats for delivery, 20% use GrubHub, 12% use DoorDash, and just 2% use Postmates. The majority of Gen Xers and baby boomers (31%) also still prefer cash over money transfer apps like Venmo or Cash App, and 36% said they utilize a friend for transportation rather than ride-sharing apps such as Uber or Lyft. 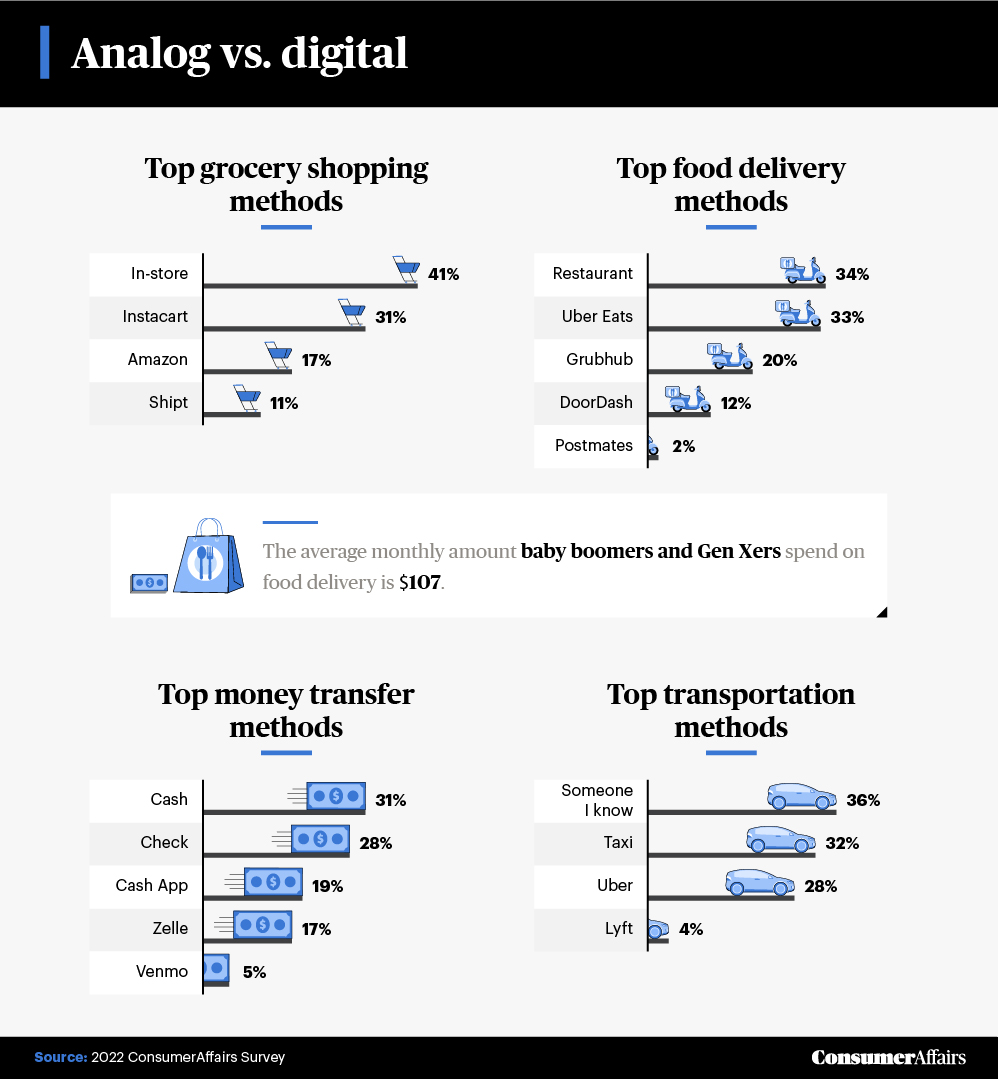 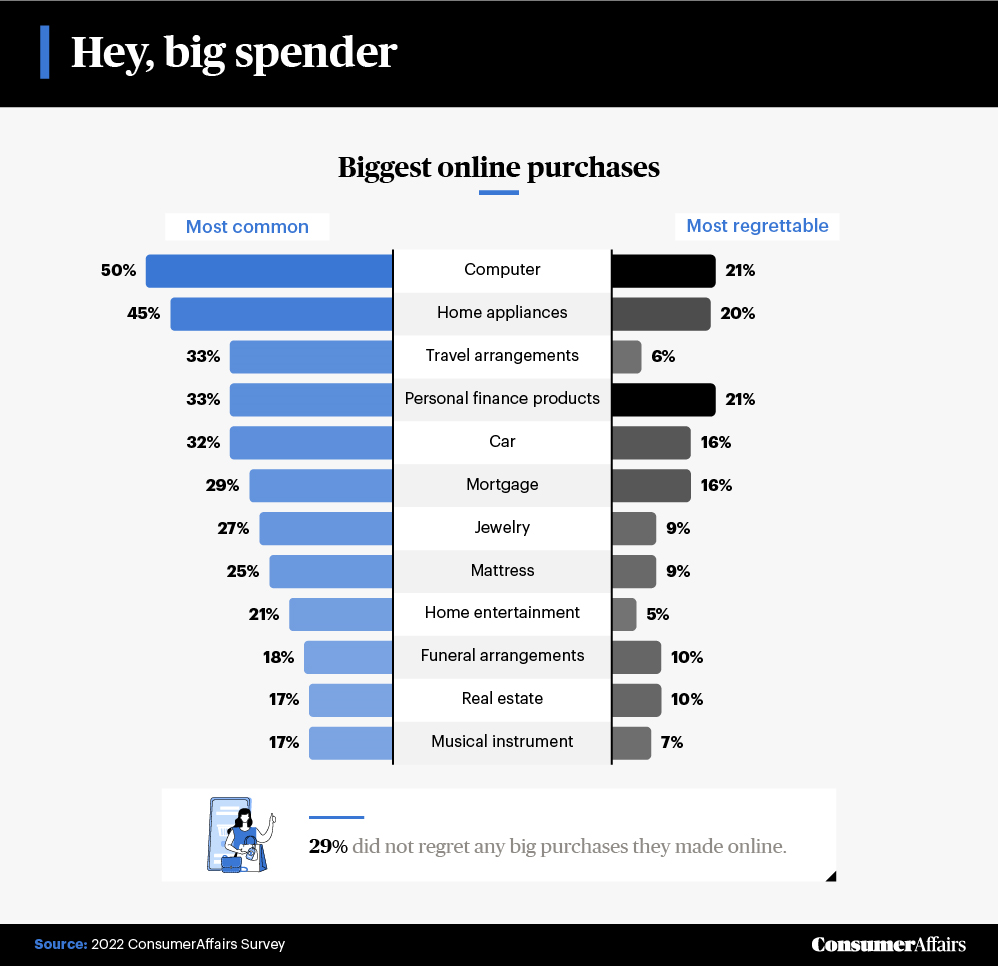 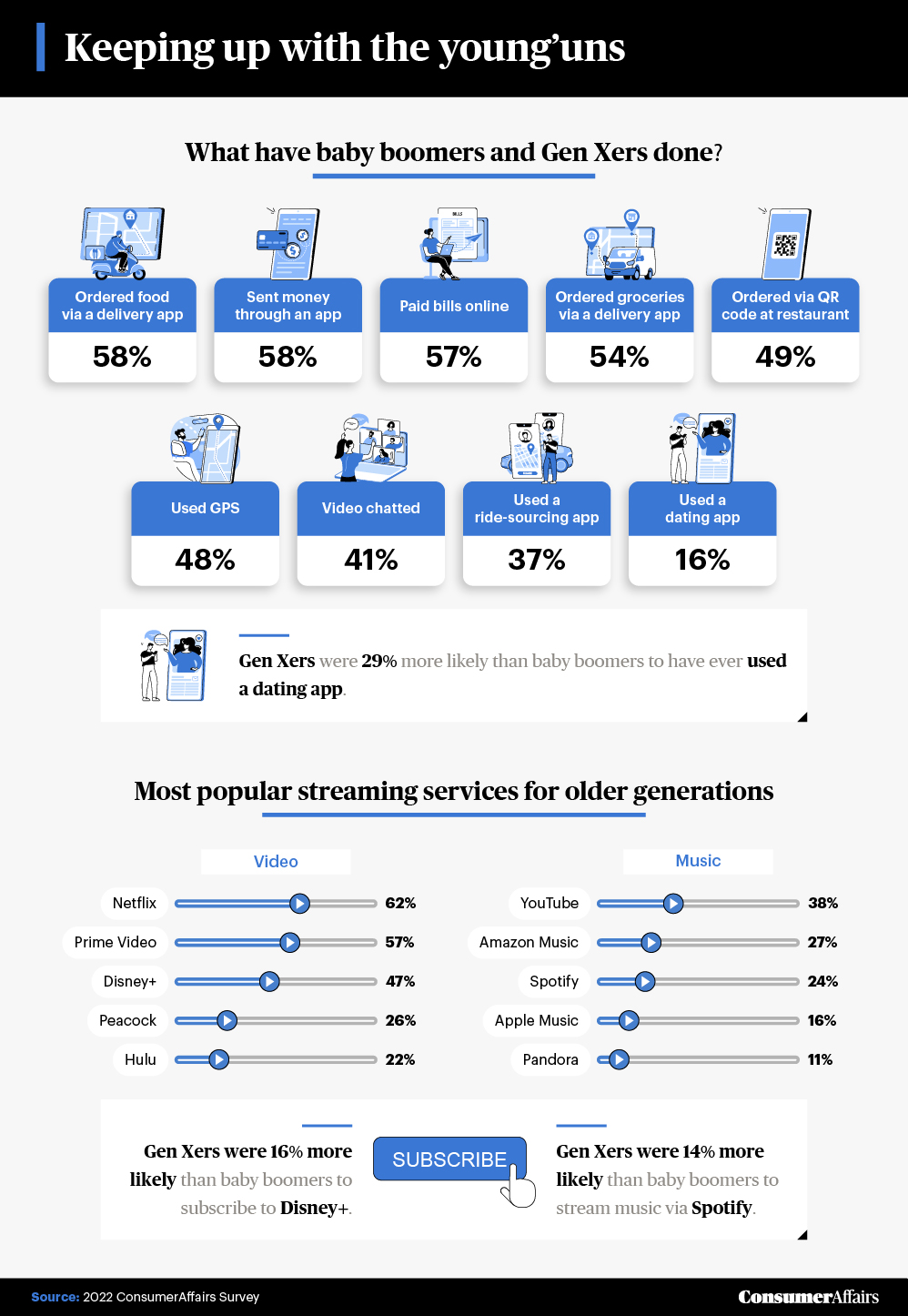 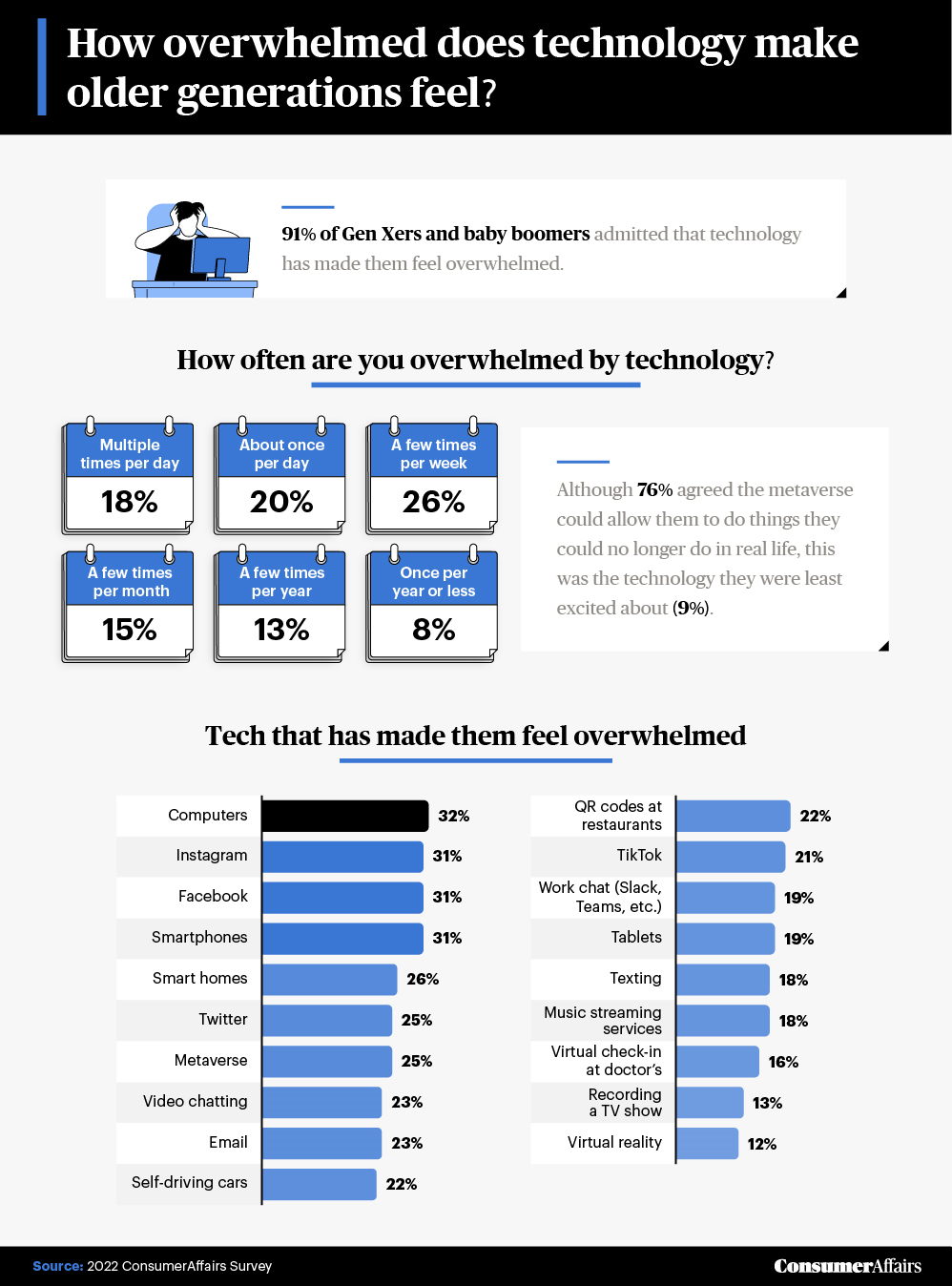 All of this certainly points to a much more relaxed and less reliant perspective on technology than younger generations have, despite the fact that many people in these older generations feel that their more limited grasp on technology creates a barrier for them and even creates opportunity for age discrimination.

It’s a new, evolving world that is introducing new technologies at lightning speed, but we can’t expect everyone to keep up. The study shows that if the tech industry wants to become more inclusive across the board, it needs to start appealing to older generations in some way or another. Whether that’s more adaptable technology or better training in the workplace, there should never be a barrier for people regardless of their age or level of comfort or knowledge.

The future of technology is vast, bright, and exciting, as we see every single day with the evolution of remote capabilities, the advent of the metaverse, and the increasingly-common utilization of apps for everything from food delivery to ride-sharing. It’s an exciting thing to witness, but it’s imperative that we don’t leave anyone behind as the digital age continues forward and technology advances beyond our wildest dreams.